Quote of the Week

"Hollywood is easy to hate, easy to sneer at, easy to lampoon. Some of the best lampooning has been done by people who have never walked through a studio gate, some of the best sneering by egocentric geniuses who departed huffily - not forgetting to collect their last pay check- leaving behind them nothing but the exquisite aroma of their personalities and a botched job for the tired hacks to clear up." - Raymond Chandler
Posted by David Johnston at 10:25 AM 6 comments:

B.H. Barry Gets a Tony

Very exciting press release on the Tonys for this year. In addition to Alliance of Resident Theatres/New York (a great organization), Tom Viola of Broadway Cares/Equity Fights AIDS (where my pal Bob works - also a fantastic organization) - a teacher of mine from Circle in the Square is being honored. Years ago, I was taught stage combat at Circle by a magic man named B.H. Barry. He was a pioneer in teaching stage combat, and I still remember some of the things he told us.

"What I teach is about making ten percent effort for a hundred percent effect. This is the easiest stuff in the world. If you can't learn this, then I'm a bad teacher. Anyone can do this."

He said this about leaping around with swords, tumbling, taking a fall, stage punches. And you know what? We all learned how to do it. Even incredibly clumsy, un-athletic me. He really could teach anyone. We all looked forward to his Friday afternoon classes. It was always the perfect end to the week.

So congratulations, B.H. You are the master.
Posted by David Johnston at 11:44 AM 2 comments:

This is an email from my old college pal, Gary Cowling, on AIDSWALK.

Thursday I went to an AIDS Walk thank you lunch. Over the years there have been many team leader events, so I was surprised to see such a small elite gathering (at a nice, swanky place). Then I was really surprised when presented with an award for our team.

1st Place Fundraising Team
From a School or University Team.

I knew we had (for the first time) raised more than any other school group - but didn't know there was a prize!

If you haven't sponsored anyone for AIDSWALK yet, why not me?

4Play at the LGBT Center

"Saturday with Martin," part of "Short Plays to Long Remember," tonight at the LGBT Center.

AIP last night at University Settlement, where Leanne Hutchison did a lovely job on "Sadie Lou Tells Her Own Side of That Unfortunate Business..." Also, Carrington Vilmont singing "McNally's Row of Flats" and essaying about a dozen roles for the AIP writers. Upcoming events include the Martin Segal Center at CUNY and the Lower East Side Tenement Museum. Admission is free.

And by all means, go see Martin Casella's The Irish Curse, running at Soho Playhouse. A very funny, touching play, with an excellent cast. I saw Bill Timoney in Dan Butler's role, and didn't realize until after the performance that he was the understudy when someone told me. And Austin Peck is far funnier than someone that good-looking should be allowed to be. Tickets are available here.
Posted by David Johnston at 10:49 AM 1 comment: 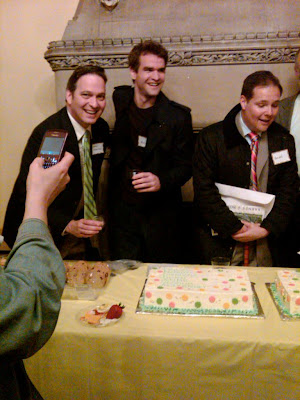 A shot taken by Jonna at confirmation last Saturday night, the Easter Vigil at St. John's. That's me, Alex Coffey and Nolan. Great night.
Posted by David Johnston at 1:50 PM No comments:

Rochelle Denton posted info on the "Saturday with Martin" reading and the upcoming "America in Play" project at University Settlement. More info is here.
Posted by David Johnston at 12:13 PM No comments:

Come to the LGBT Community Center, Tuesday April 13, 2010 at 6:30PM. (The Center is at 208 West 13th Street, near 7th Ave.) As part of the Center’s 2nd Tuesdays Cultural Series, "4Play," featuring readings from "Short Plays to Long Remember." And - the evening includes a reading of "Saturday with Martin," featuring George Hosmer and Brian Fuqua, who originated the roles in 2003 for Blue Coyote. Original direction by Kyle Ancowitz. Ten bucks at the door. This is a script I'm very fond of, and I'm very excited I get to hear George & Bri go at each other again. UPDATE: Reservations at the Center are available here.

On Monday, April 12 at 6:30, America in Play presents "Crossing Over" at University Settlement, 184 Eldridge Street. While I haven't been able to be as active with AIP this spring, the evening does include some of my material and it's a terrific group of writers, led by Lynn Thomson. More info here. Admission is free.

And "Beautiful Darling" - the Candy Darling documentary years in the making - screened at MOMA on Friday night, part of the New Directors series for Film at Lincoln Center. OK, I was disappointed they cut my interviews for the film - but it's a gorgeous, touching piece of work. Lots of film footage and interviews that have never been heard or seen before. It was kind of overwhelming for me to hear Tennessee Williams' voice talk about working with Candy in "Small Craft Warnings," know what I mean? I hope this one has a long long life.

UPDATE: "Short Plays to Long Remember" is up on Amazon. Hell, as long as you're on Amazon, why not buy "Playing with Canons," which includes my adaptation of "The Eumenides?" Why NOT? And "A Funeral Home in Brooklyn," part of Best 10-Minute Plays of 2008, got a nice write up on Barnes and Noble.com Buy it and give it to a loved one. OK, maybe not that, but buy it.
Posted by David Johnston at 1:04 PM No comments:

It must be spring, 'cause I'm back raising money for AIDSWALK. Click on the link to donate. And thanks.
Posted by David Johnston at 8:30 AM 2 comments:

...about a show I really enjoyed at the York. Yank is moving to Broadway.
Posted by David Johnston at 6:26 AM No comments: