The Wedding Gift of Pirate Granny

Quote of the Day

I stole this from Larry Harbison's email signature.  I think it's great.

"It requires a certain largeness of spirit to give generous appreciation to large achievements. A society with a crabbed spirit and a cynical urge to discount and devalue will find that one day, when it needs to draw upon the reservoirs of excellence, the reservoirs have run dry." George F. Will

A very nice write up for the show from Andy Propst at Backstage.
Posted by David Johnston at 8:28 AM No comments: 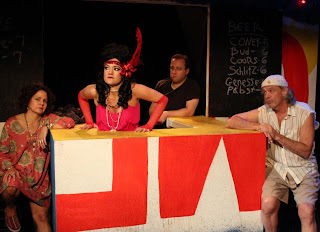 CONEY is back up and open for business.


Gary and I talking it up for TDF, an interview done with Hilary Bettis pre-storm.
Posted by David Johnston at 12:12 PM 1 comment:

My Friend Scott Covered Ayn Rand with a Post-It that Said Tennessee Williams, and I Still Couldn't Finish It

I'll  admit it. I'm at a bit of a disadvantage in the whole Ayn Rand discussion.  I have never ever ever made it through any of her books.  And I've tried.  But fifty pages of that gasping earnest humorless prose hitting you on the side of the head over and over like a metal folding chair.. I mean, life is short, you know?

So I love this quote from President Obama in Rolling Stone:

“Ayn Rand is one of those things that a lot of us, when we were 17 or 18 and feeling misunderstood, we'd pick up. Then, as we get older, we realize that a world in which we're only thinking about ourselves and not thinking about anybody else, in which we're considering the entire project of developing ourselves as more important than our relationships to other people and making sure that everybody else has opportunity – that that's a pretty narrow vision. It's not one that, I think, describes what's best in America. Unfortunately, it does seem as if sometimes that vision of a "you're on your own" society has consumed a big chunk of the Republican Party.”--Barack Obama, ROLLING STONE interview.

Hell yeah.  I was reading Herman Hesse at that age.  Because I was sensitive as shit.

Posted by David Johnston at 11:06 AM No comments:

My friend Matt Freeman interviews me on his indispensable blog.
Posted by David Johnston at 9:28 AM No comments:

Zack Calhoon's People You Should Know

Zack Calhoon has posted a series of e-interviews on CONEY with myself, Amy Staats, Tracey Gilbert and Boo Killebrew on Visible Soul.  Take a look.
Posted by David Johnston at 12:34 PM No comments: