My fabulous summer stock pal Dena Douglass brought me a SIGNED copy of Edward Albee's "Stretching My Mind" yesterday at brunch. She had seen Albee and Kathleen Turner at an event at Westport Country Playhouse a week ago and scored me a personalized copy. I love it.
Posted by David Johnston at 2:23 PM No comments:

The Life You Save May Be Your Own

I've been reading a terrific book, "The Life You Save May Be Your Own," by Paul Elie. It's a book describing the lives of four writers in mid-century America, and where those lives intersected, particularly through faith, activism and literature. The four writers are real favorites of mine - Flannery O'Connor, Walker Percy, Thomas Merton and Dorothy Day. The book is like encountering old friends you haven't spoken to in a long time - then you wonder why you were out of touch in the first place.
Posted by David Johnston at 9:32 AM No comments:

The Cap Fringe site is up and running, and tickets are on sale. It runs five performances, July 18 through July 27 at the Flashpoint Mead Theatre Lab in DC. I haven't been directly involved in rehearsals, but I've been corresponding with the director, Ryan Taylor, and I'm very excited to see it.
Posted by David Johnston at 8:22 AM No comments:

You Know What Sucks? A1Books

A1 Books sucks. I ordered a book from them in early May. They say they shipped it on May 14. I waited. Then I asked where my book was. They said shipping could take 7 to 14 business days. That passed. I asked where my book was. They said oh sorry sometimes shipping can take up to 21 business days. I waited. Then I asked for a refund because by this time it had been – oh – five weeks since I had ordered the book. They refunded half my money. They said it had been delivered at my post office, where it sat until it was returned as undeliverable. So they took half my money and gave me bupkus. These guys suck. Don’t buy anything from them. They will crush your research and reference dreams.

Now, I am not one of those people who would tell you to – oh- go to their site, set up an account and then email their help desk and say “You owe David Johnston nine dollars and forty eight cents.” I would not encourage you to go to Amazon and let them know their vendors are douchebags. I would not tell people to do that.

But rest assured, A1 Books, vengeance is mine. A river of hot blood by moonlight will not slake my thirst. Know that I have left curt feedback on Amazon, in response to your high-handed, smirking so-called ‘Help Desk.’ You snuff-dipping, handkerchief-waving, cake-munching aristocrats, determined to oppress the masses with your ‘restocking fees’ and your ‘Thank You Reward’ discounts. Madame La Guillotine waits. Vive la Revolution. Assholes. 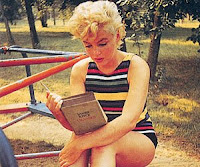 Posted by David Johnston at 2:12 PM No comments:

Laura Desmond, star of "Great Escape," "Most Wonderful Love," and Freeman's "White Swallow," where she plays a woman who gets off sexually by watching her husband weep. That's her in the picture choking a guy.
Posted by David Johnston at 3:16 PM No comments:

If you have ever wondered if penguins are really gay, or just occasionally disoriented, this is the movie for you. I particularly loved the Salvador Dali jellyfish.
Posted by David Johnston at 11:38 AM No comments:

Last Friday night, my friend Matt scored tickets for "Hamlet" in the Park. The production was marvelous – one of the best Hamlets I’ve ever seen, certainly on the short list with Bergman and the Wooster Group. Michael Stuhlbarg is kind of the un-Hamlet; small, quick, fey, comedic, unheroic in the swashbuckling sense. He has a keen, quick intelligence, and makes every bloody word and moment crystal clear. His Hamlet is a good man –sensitive and kind and insecure – in a horrifying predicament. Oskar Eustis stays away from anything smelling like his concept of Hamlet, and tells the story. It's three and a half hours and it sails right by.

Sam Waterston is a fabulous Polonius. The girl in front of me screamed when he got stabbed. The rest of the cast – Andre Braugher, David Harbour as Laertes – are excellent. Lauren Ambrose was Ophelia – good in the early scenes, not quite there in the mad scenes yet. In a terrific touch – and I kept wondering if Eustis had seen the Bergman – her ‘flowers’ in the mad scene are stones. At the end of the scene, she puts on a heavy overcoat, fills the pockets with stones, and exits upstage towards the lake.

Sam Waterston went up at one point, big time. But he’s an actor of such generosity and egolessness, the audience quickly forgave him and applauded his attempts at recovery. There was a long pause while he stared forward – a looong pause – and he said very quietly, “Where was I?” One of the supers around him fed him a line. He fumbled a bit more, running through where he’d been. Then back on track.
Posted by David Johnston at 2:45 PM 3 comments:

Rochelle Denton over at NYTE posted a nice update for me. It's here. Her granddaughter Julie also has a play in the Cap Fringe. I'll post more info as it comes to me.

Don't forget Playwrights for Pets tonight at Baruch. All proceeds benefit Animal Haven. The evening includes "Yes Yes Yes" with Jimmy Ireland, and Beau Allulli who is graciously stepping in since Joe was unavailable. Gary Shrader reprises his direction from "Happy Endings" in February.
Posted by David Johnston at 9:03 AM No comments:

You Get Exhausted Every Night, You'll Wreck the Van!

Saw this last night, and it is good fun. The boys are cute, they work hard, the show clips along, and it does have genuinely enjoyable music and moments. Great to take your out of town friends to. Also good to take anyone whose tastes might be a little - conservative. It's like "Nunsense." Everyone can get the jokes and any satire is so gentle no one could get their panties in a bunch. For cheap seats, I'd go again.

It's a great last-minute impulse buy if you're at TKTS.
Posted by David Johnston at 10:49 AM No comments:

Vote For Our Tagline - "Where Actors Find Their Space"

OK, do me a favor. At NYC Performing Arts Spaces, we are up for the 2008 Getting Attention Nonprofit Tagline Award. This is for our Theatre site which launched a year ago, NYC Theatre Spaces.

We are one of five (!) taglines in the Arts & Culture category. So - go to the link below and vote for us. Vote for "Where Actors Find Their Space." Go do it. Now. I don't ask much.

If we win, we get a toaster. I'm kidding. I don't know what we win. A toaster would be nice, though.
Posted by David Johnston at 11:41 AM 4 comments:

Went out with Dave on Friday night to see “Vivre sa vie” at Film Forum, a Godard film with Anna Karina. This is like Godard’s Sirk movie, the story of a girl who slides into prostitution, then falls in love with a beautiful young boy who reads Poe in French. Then a pimp shoots her and she dies. I loved it. It’s a beautiful strange little movie, full of weird Godard tics like shooting a whole scene from the back of the actors heads. Karina is beautiful. At one point she watches several minutes of Jeanne D’Arc with Falconetti and Artaud. Jeanne D’Arc is all about those obsessive close-ups of Falconetti, like Karina an extraordinary looking woman.

In honor of Harvey Korman, I bought a new DVD of Blazing Saddles. Came home and of course watched it for the millionth time. And I still laugh out loud at parts. Some I laugh at because I always laugh at them, sometime I laugh at something I’ve never thought was funny before, and sometimes I start laughing because I know that really funny thing that always makes me laugh is about to happen and I start laughing IN ANTICIPATION OF SOMETHING FUNNY HAPPENING.

I watched my new DVD of “Demons,” which was swell and very scary. Dario Argento produced it, and co-wrote it. Great set up. It’s Berlin, and these two girls get free tickets to a screening of a horror movie. They go, and it turns out to be a cheesy movie about teenagers discovering the tomb of Nostradamus. (There's the requisite spooky Nostradamus quote about cemeteries being their cathedrals and the cities our tombs! Or something.) And they start turning into demons. And then the plot of the movie starts happening in the audience. It’s mid-eighties, so everyone has hilarious clothing and hairstyles. The effects are really not bad for the time and it does have some genuinely scary stuff in it, before it turns into a nonstop bloodbath with eyeballs turning red and demons with eighties hairstyles tearing off the tops of people’s heads. And it’s got music by Rick Springfield!

Sunday went with Deb, Doug, Keith and John to see Catered Affair at the Walter Kerr. It’s modest stuff but well done, a Broadway musical about people with small dreams. Faith Prince is enormously touching in the lead. For a while listening to this show, I kept thinking these are not people who burst into song. But then she has the number after receiving the dead son’s medals and and effects. She sings to her husband how they are going to take the money and give the girl a wonderful wedding, a catered affair, they lavished all on the son, ignored the girl and now he’s dead. And she sings about how they have never given her anything and now they are going to give her a day of joy to look back on the rest of her life, some bit of joy her parents gave her when they had given her nothing else. And the number was exquisite, and I can’t imagine someone doing it better than Faith Prince. Tom Wopat is fine as a good man dealt a bad lot. Leslie Krietzer and Matt Cavanaugh are both good, but have little to do in those roles. And Harvey. God Bless Harvey. He can get a laugh out of a line like “I’m not invited?”

It’s interesting. Some of the critics complained how they had rewritten the show from the original. Harvey plays the uncle who everyone knows is gay but they all still refer to him as a ‘confirmed bachelor.’ And many critics complained that the character is now an anachronism, a modern gay man in the midst of this fifties story. And it’s nothing of the sort. He’s playing a gay man who has a measure of self-esteem. I don’t know what’s anachronistic about that. No gay man had any self-esteem before Stonewall? And they are very careful to always use the language of the time. The character would have been an anachronism if they were recreating a TV show of that period. But not if we’re talking real life.

It’s intriguing that it took two gay men – Feirstein and John Bucchino – to write a musical that’s about the importance of marriage.
Posted by David Johnston at 11:13 AM 2 comments: