"Firebird is a Stallion." 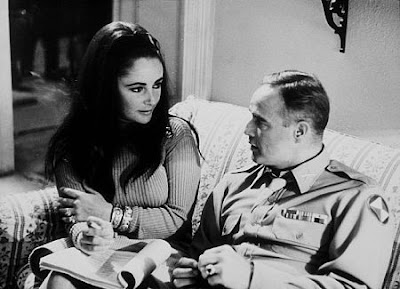 Brando, Brando. Was anyone ever able to use a prop to convey such longing? When he puts on Eva Marie Saint’s little white glove in “Waterfront.” There’s a similar bit in “Reflections on a Golden Eye” when he picks up an empty cigarette pack that Robert Forster, the silent sexy private, has dropped. Brando - as the repressed army man Penderton - picks it up like it’s a piece of Waterford crystal. You later see him in his study, carefully smoothing out all of the wrinkles in the cig pack, hiding it away in a box of treasured mementos. You see him as he hears Forster coming up the stairs in his house, smoothing his hair and looking like a nervous virgin on her wedding night.

So interesting to look at Brando in that role next to Stanley in “Streetcar.” Stanley is such an animal, someone who so delights in his own body, his own movements. Penderton is so deeply uncomfortable in his own skin. It’s like he’s forced to exist in a frame that isn’t his, a rented body.

“Reflections” is a Carson McCullers freak show; Julie Harris plays the colonel’s wife who’s cut off her nipples with garden shears after a baby dies. She keeps a flaming queen of a Filipino house boy, and they sit around doing water colors in the evening. Elizabeth Taylor is wonderful as the life force Leonora, so ripe she’d burst if you touched her. She’s great in the scene where she horsewhips her impotent husband in front of a roomful of guests. In “Reflections” she shows how good she could be with good material, co-stars and a director like Huston.

Harris nails one scene in particular. She comes back into her own house, after seeing Forster enter Penderton’s house and thinking he’s her husband. She slowly climbs the stairs as a torrent comes out of her, aimed at her husband, Brian Keith; she’s divorcing him, he needs to loan her five hundred dollars which she will pay back at five percent interest, she is leaving in the morning and will never set foot in this house again; all the time she’s climbing the stairs slowly, gripping the rail with Keith slack-jawed at the bottom. It’s a breathtaking moment, when you finally see this character shatter and an avalanche comes out of her mouth.
Posted by David Johnston at 10:18 AM