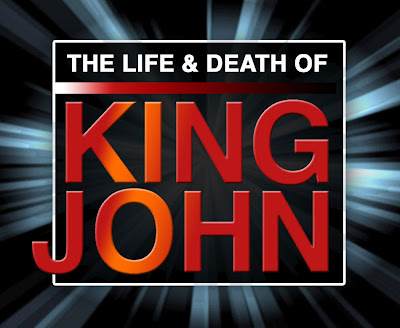 They're in previews now, but I just have to dash off a quick love letter for one of my favorite actors (and human beings) - Vince Gatton, who is currently playing King John at the Access Gallery downtown.

Vince and I have worked together many times -Candy & Dorothy, Busted Jesus Comix - and more readings of other works than I could remember or count. He's a consistently surprising, inventive and soulful actor. His toolbox is full and he's crafty as hell.

In the title role, he's petulant, needy, manipulative, vindictive and vulnerable; a would-be Richard the Third undone by his own incompetence and bad luck. You want to strangle him and you feel for him. John's a lousy rotten prick and he still doesn't deserve the damnation that crushes him. (Shakespeare gets his cake and eats it, too. Jerk.)

It's an early Shakespeare, but it's a fascinating study in political machinations and collateral damage. People form alliances, double-cross each other, make threats, make nice, all the while the country goes down the tubes. Ross Williams directs and it's strong and sharp. They use multi-media but it doesn't feel like a gimmick; it actually adds to the storytelling in interesting and creative ways. The set design is the best use of the Access Gallery I've ever seen. Get tickets soon for this - it's filling up in previews and it closes Oct. 2.
Posted by David Johnston at 12:49 PM