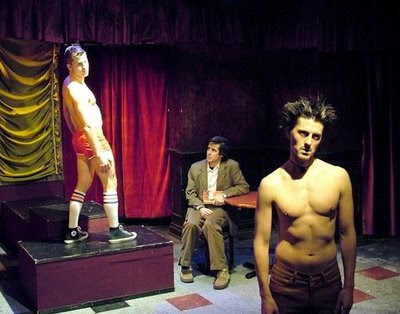 "Yes Yes Yes," which was previously seen in Blue Coyote's "Happy Endings," will perform at the Samuel French Festival on Thurs July 16. This version features Sean Kenin, Joe Curnutte and Joseph Yeargain, once again directed by Gary Shrader. It's at the Peter Jay Sharp Theatre (which is Playwrights Horizons, we're just not allowed to say that - but it's that building, OK?) 7:30 Thurs night. Tickets can be snagged here.

More info on the Festival can be found here, their very cool blog for the event.

Pictured above: Joe Curnutte, Jimmy Ireland and Carter Jackson in the original production of "Yes Yes Yes" at the Access Theatre, 2008.
Posted by David Johnston at 11:41 AM